"Because singing involves a lot of physical work, I always makes sure that I am healthy and in tip-top condition before a concert. That however was not what happened right before we flew to Riga, Latvia to compete at the World Choir Games. I suffered from severe throat congestion after getting drenched in the rain on our first day in Vienna. But instead of sulking, I appreciated the advantage that a congested throat can sometimes do to a second bass like me – it produces a fantastic basso profundo sound of the Darth Vader kind! It just so happened that many of the pieces that we performed at the competitions were peculiarly low for basses. And I was able to hit those low B’s and sustained low D flat with so much ease. Praise God for his sovereignty! What was meant to harm, God used for good!" - Rainier Pagcaliwagan, ACS bass

"Riga was beautiful and unforgettable. With its cobble-stoned streets, lush parks, and decrepit buildings, it had such a medieval charm. The people, seemingly aloof and foreign, were actually quite warm and friendly. Many of us surrendered to this quaint city as our anxiety grew with the coming competitions.

​"We had our individual worries and concerns, having spent about a year preparing: hours and hours of rigorous practice, memorization, and rain-and-traffic-ridden commutes. Interesting how all these were eventually forgotten by the time we stood in front of a wondering audience; with four tables spaced equidistant at the fore.

"I remember feeling disparate emotions before entering the stage—self-doubt, excitement, wonder, gratitude, worry, nervousness—to only subside when our conductor raised his arms to begin. As soon as the first note came out, it felt like nothing else mattered. We were all possessed by the music, driven by something intrinsic and natural. It was cathartic to let go of so much welled-up passion and substantiate hours of pain-staking labor.
Inside the Arena, amid a cacophony of choirs from more than 70 nations, we joined in the celebrations with unease. As the category winners were announced one by one, we were delirious. Some of us sat silent and tense, while others were in some feverish rave.  15 names in and we haven’t been called yet! Questions seemed to linger:  Were we on pitch then? Did the judges notice that we missed a cue? Did we sing well? What made it all worse was the realization that the singing was done and we couldn’t go back. There was no choice really but to wait. It was excruciating!

"And then, we were called.

"We all cheered wildly and leapt off our seats. We won! We won! Amid a flurry of screams, jumps, tears, and tight hugs, we rushed to the stage to collect our prize. It was euphoric to hear our national anthem played to an arena of more than 12,000 choristers, standing, looking up as the Philippine flag rose above us all.

"Riga is indeed unforgettable. The memory of the city, with its many charms (long walks included); the emotions; the performances; the competitions we experienced will certainly be cherished and remembered fondly for a lifetime." - Leo Locsin, ACS bass

"It was the announcement of winners already, and some of us went inside the theater to watch. There were no allotted seats for us, so we had to find random empty seats all over the audience area. I, along with other girls, found the whole back-right row of the orchestra area with only two elderly men occupying the inner aisle seats. We hadn't settled in yet when the host started announcing winners - and she was saying everything in Spanish. That whole moment was a blur as we scrambled for our seats and everything we could hear was in a language we couldn't really understand.

"At that moment, all I could think of was, "What's happening?" As I sat on the chair next to the elderly gentlemen with my frazzled face (I'm pretty sure all of us looked like this), my new seatmate started talking to me - in Spanish. I turned to him and said, "I'm sorry I don't understand. I don't speak Spanish." To which he replied, pointing to the host onstage, "Oh okay, so you don't understand what she's saying." What a pleasant surprise it was to have an English-speaking Spaniard as a seatmate! I shook my head in reply.

"Members of some choirs were cheering already for awards won, and we still had no idea what was going on. My seatmate then explained to me that all the choirs that performed that night were going to receive some sort of award. He said that as long as we weren't called as the announcements moved on, we should be happy.

"The awards announced that came first were only "special awards". The major awards would surely come at the end. We waited as more special awards were being given out. The next time my seatmate would translate something would be the point where cash prizes were tied up with the awards. It started with public's choice, then best conductor. The next announcements were barely understandable, with the winning choirs' noise overpowering the voice of my translator. He finally said something I understood - "For me it's you. You will be the winner!" "Gracias, muchas gracias!", I said, nodding, with a wide smile.

"​The winners of the Polifonia category have already been announced at this point. We awaited the winners of the Habaneras category. Third place went to a group from Ukraine, second went to an all-male choir from Madrid. My translator then turned to me with a knowing smile. "This is it! For twelve thousand euros." And just like that, in about a quarter of a second, our name was called out. We won. WE WON!!!! I jumped from my seat and waved my flaglet vigorously to the point that the stick broke. Who wouldn't be ecstatic - we got the top prize! After all the hugs and tears of joy, I thanked my translator one last time. Then the ACS gathered with all the other winning choirs for a tutti song, "Amor Esto Es Amor", which was the contest piece of the event. Ah, it was a wonderful night indeed." - Martha Flores, ACS soprano

35 years ago, our conductor Jonathan Velasco first came to Puig Reig as member of Saringhimig Singers. He was a teenage chorister back then.  That trip paved the way for numerous other Filipino choirs to experience the picturesque beauty and charm of this town and share their music.  This time he returned as a conductor, bringing his own choir to meet the very people who had become his friends.  We were very happy to meet them and sing for them.
"It was such a blessing to sing, not just in the Santa Maria del Mar Basilica in Barcelona, but in the world famous Sagrada Familia as well.  Our hosts organized a free tour for us of this magnificent church, and no less than the rector himself Fr. Lluis Bonet, served as our tour guide.  Our tour became somewhat of a pilgrimage as he lead us to various parts of the church and asked us to sing in each one, which we happily did as a form of prayer.  How many people get to pray in such a special way in such a beautiful place?  We were surprised at how we managed to sing well without having vocalized!  It was truly a moving and unforgettable experience for us."  - Bitchik Panlilio-Dimalanta, ACS alto

" 'Señor' was always going to be last because it took me a long time to understand the prayer. Why would anyone pray particularly for generosity? Wouldn’t one find more use in praying for something "bigger" --- compassion or love, perhaps? The value of generosity, the selfless, condition-free act of giving, didn’t become apparent to me until I experienced what it was like to receive. Throughout the loneliness of living abroad, away from friends and family, and the professional challenges of becoming an educator and a musical leader and the grief brought about by losing my parents, I experienced receiving overwhelming amounts of love, kinship, trust and affirmation. This blessed experience of unexpectedly receiving all these things helped me see that one of the best things one can do for another is to give and to give generously.

"The Ateneo Chamber Singers’ journey to Europe is a story of generosity too. As a 'choral groupie' I was witness to their memorable moments these past few weeks. What made it truly special for me was knowing the story behind the show. Many acts of generosity and kindness paved the way to Europe, both from the members as well as their families, who have freely shared their moms, dads, wives, siblings with the choir. There was generosity in braving storms and mind-numbing traffic, just to get to octet rehearsals, in being open to growth, both musically and spiritually, in setting aside differences for the sake of the ensemble, in choosing to celebrate life in the face of infirmities, in giving one’s everything to a performance despite being exhausted or dehydrated, in letting go of pitch anxiety to appreciate having given a meaningful performance, in celebrating each others' personal milestones and breakthroughs. At the end of the day — literally at the end of the tour — hearing the choir sing a prayer for generosity made the tour make so much more sense to me. This trip was never about winning. It was never about receiving praise. It was always about giving. It was about leaving the audiences with performances that were prayers too, moments that they will remember and cherish for a long time to come." - Gianpaolo Eleria, ACS resident composer
Performances:
1. Santa Maria de Montserrat Abbey (July 31)
2. Concert at Cova Sant Ignasi in Manresa (July 31)

This competition tour would not be possible without the invaluable help and support of
the Ateneo de Manila University and Jesuit Communications.

We thank our generous sponsors for partnering with us!

And our heartfelt thanks go out to all our friends!

Very special thanks to Ammon Velasco for our beautiful costumes! 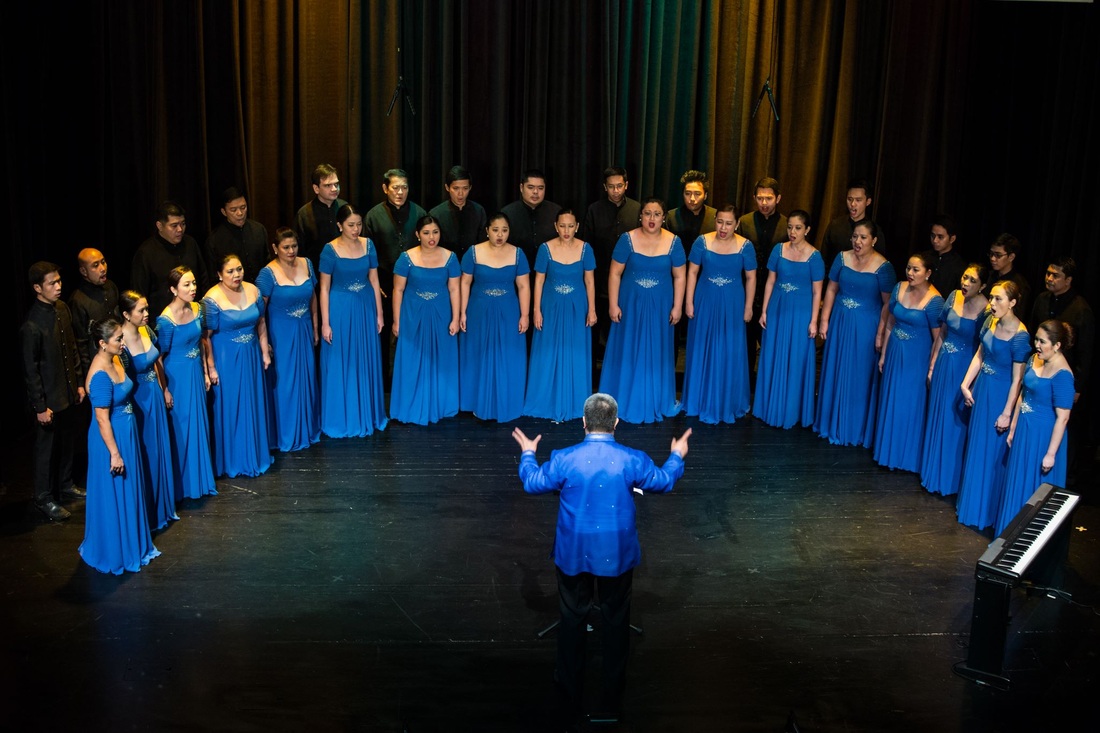