About the THREE Festival 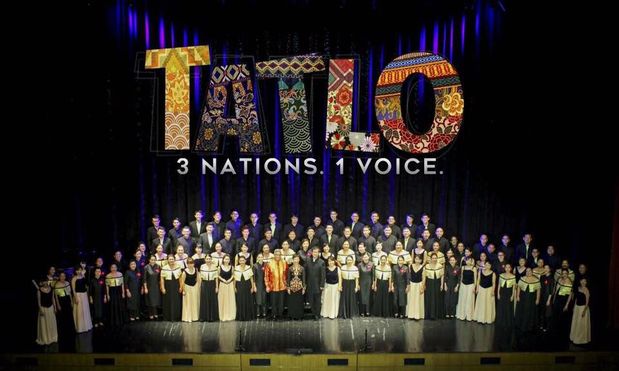 In 2006, the conductors of three internationally-acclaimed Asian choirs came up with a brilliant idea of coming together every two years to make music together.  Jennifer Tham of the SYC Ensemble Singers (Singapore), Ko Matsushita of the Gaia Philharmonic Choir (Japan) and our own Jonathan Velasco envisioned a regular series of concerts that would celebrate friendship, love, joy, and hope through music.

In 2007, the first-ever run of THREE was staged at the Esplanade in Singapore.  The second happened in January 2009 when all three choirs performed before a full-house in Tokyo, Japan.  In January 2011, the ACS hosted TATLO in the Philippines, mounting a choral workshop at the Union Church and a culminating concert at the Cultural Center of the Philippines.

Immediately after the Manila leg of Three, the Gaia Philharmonic Choir proceeded with preparations for the second run of the festival.  In January 2013, all three choirs headed north to Sapporo in Japan, where workshops and mini concerts were held, also culminated by a grand concert.  Last December 2014, SYC hosted THREE once again at the Esplanade in Singapore, coinciding with their 50th anniversary celebrations.  Most recently, the last leg of Three was celebrated in a grand concert at the Theatre at Solaire in Manila, where the three choirs performed Leonard Bernstein's Chichester Psalms together with the ABS-CBN Philharmonic Orchestra and Gerard Salonga.

THREE is a true testament to great talent, transcendent friendships, and music that genuinely brings out love, hope, and joy.

In 2007, the ACS brought with them a three-choir arrangement of Ryan Cayabyab's "A Better World."  It was the choir's contribution to the tutti pieces to be sung by all three choirs.  The song resonated the vision of THREE so well that it had been sung during every leg of Three in Japan, Manila, and Singapore.  It easily became the anthem of THREE, celebrating LOVE, HOPE and JOY through music.

​Singapore 2007
Tokyo 2009
The ACS flew to Tokyo for the second leg of THREE.  While we only had 26 singers, we performed a number of choral masterpieces written by Filipino composers at the beautiful concert hall.
Manila 2011
It was finally time for us to host THREE in Manila!  We intended to bring THREE to the next level by adding a few more elements to the usual joint concert.  Together with our friends from SYC and Gaia, we conducted a workshop for choirs and conductors, which was followed by a mini concert.  The grand concert was later held at the Cultural Center of the Philippines, where the ACS came out with a full cast of 49 singers!
Sapporo 2013
THREE came to a full circle, with round 2 beginning in snow-covered Sapporo at the Hokkaido perfecture in Japan.  With just 24 singers, the ACS flew to Sapporo and performed an all Filipino-repertoire in tune with the theme "songs from the south."  At the grand concert, SYC, Gaia and ACS were joined by 300 students from Sapporo to sing A Better World!
Singapore 2014
It was time to come back to Singapore for another run of THREE last December 2014.  This was a very special trip for the ACS as the 40+ strong cast was to sing an all-Cayabyab repertoire, with none other than Maestro Ryan himself accompanying us on the piano!
Manila 2017
We made history on January 14 as we mounted the last run of THREE at the Theatre at Solaire in Manila.  Each of the three choirs sang their respective programs, but right after the first part of the concert, we formed the Three Grand Choir and performed Leonard Bernstein's Chichester Psalms with the majestic ABS-CBN Philharmonic Orchestra under the baton of Maestro Gerard Salonga.